Entries have opened for the 26th edition of the N3TC Drak Challenge canoe marathon in the Southern Drakensberg on 19 and 20 January, with the event retaining its status on the International Canoe Federation’s Classic Series.

With the approach of regular summer rainfalls paddlers are eyeing the water levels in the popular 62km stretch of the Umzimkhulu River between the Castleburn Bridge and Early Mist Farm that hosts the two stage race, as many paddlers opt to trip and train on the river during the end-of-year holidays. 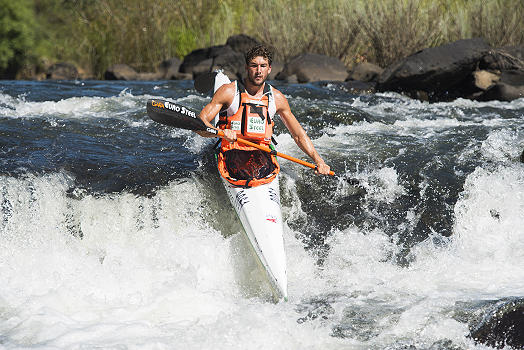 Defending champ Andy Birkett, the winner of the last five editions of the race, has confirmed that he will be travelling up from his new home in East London for the race. Also sure to be on the start-line is eleven times world marathon champion Hank McGregor.

The pair have become good friends and pooled that friendship into a very successful K2 combination that took them to the gold medal at the last world marathon championships in Portugal.

Both share a passion for the clean waters of the uMzimkhulu, with its mix of rocky technical rapids and long flat pools where traditional marathon racing strengths come to the fore.

The annual two-day race attracts paddlers from every corner of the country, despite the fact that it generally falls on the first weekend after the school holidays.

The race is the climax of what the paddlers have started to call ‘Drak Season’, as it starts with the annual Gorge Dash as part of the Canyon Club Champs on Saturday 15 December followed the next day by the popular KZN Mixed Doubles Champs.

The race’s social media platforms are updated with river level information every day from the beginning of December, allowing paddlers to take advantage of good water that follows the regular afternoon Berg thunderstorms.

That makes it a preferred stretch of water for paddlers to get in important training miles for the FNB Dusi Canoe Marathon which takes place a month after the Drak Challenge.

The race will continue to base its plans around community involvement and channelling proceeds from the race into organisations like local schools, the Round Table and Pevensey Place.

The organising club has been passionate about using its resources to confront the invasion of alien invader plants, and in particular the Black Wattle that spread quickly along the banks of the river.

“We are a race with a big heart,” said race committee head Lloyd Riggien.

“We want to be the best value for money event on the national canoeing calendar, and the paddlers will walk away with a great quality race garment, tie-down straps instead of medals, and the top 100 K1s will get an added bonus in the Centurion prizes.

“Add to that the FNB Music Experience concert on the Saturday afternoon and the two lucky draw K1s on offer, and there can be no quibbles about value for money,” said Riggien.

“What we love the most is the attitude that the paddlers bring to this river. They came up with the motto ‘The Most Fun You Can Have Canoeing’ and we work hard to keep it that way,” he concluded.
Entries can be taken online via the ROAG portal at http://drak.co.za/enter/