As paddlers start to enter the 2019 edition of the N3TC Drak Challenge canoe marathon, in partnership with FNB, in the Southern Drakensberg on 19 and 20 January, defending women’s champ Jenna Ward has confirmed she will race back from the northern hemisphere to try and retain her title

Ward will return from holidaying in Thailand the week of the race and will be hoping to use a combination of her knowledge of the river and her solid base from a successful 2018 to stand her in good stead.

“I really love the Drak and love the fact that you have no idea what the conditions are going to be like until to you get there on race day,” said the Euro Steel racer, who won last year’s race in an exciting tussle with Robyn Owen on a testing low river. 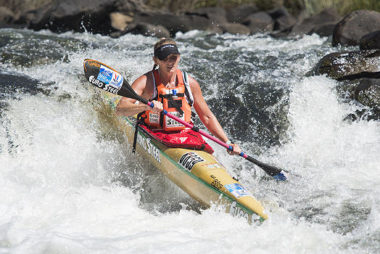 “I have had a solid 2018, and the holiday is going to be more like a training camp than a holiday, so I should get back in pretty good shape,” she said.

“I am very competitive by nature, so naturally I will do everything I can to try and win the Drak again,’ she said.

She said it was going to be tough given the high standard of women’s river paddling at the moment.

“At the Hansa Fish the top five women finished within five minutes of each other after 82km and five hours of racing, and it will be the same at the Drak,” she said.

“Simply put, you cannot make a mistake. One swim and your race is over, so a lot rests on your skills in a boat and your knowledge of the river,” she stressed.

That may count in her favour, as she joined the Drak Trout club last year by finishing her tenth Drak Challenge, and she often spends time paddling on the uMzimkhulu around Underberg during the holidays.

Her first Drak was somewhat accidental as she was thrown into a kayak as a 14 year-old schoolgirl.

“I think I swam six times on the first day!” she recalls.

“I like to tell every novice who is scared of rivers that we were all there at some stage and you have to start somewhere. We were newbies once.

More than anything she is relishing returning to Underberg. “It is just the best weekend away. A great weekend away in the Berg with your friends and family, with some paddling thrown in for good measure,” she said.