2015 N3TC Drak Challenge runner-up Lance Kime is thrilled by the recent news of the uMzimkhulu River finally filling ahead of the Southern Drakensberg’s popular two day canoe marathon on Saturday 23 and Sunday 24 January with the Euro Steel star relishing the challenge of another strong elite men’s field. 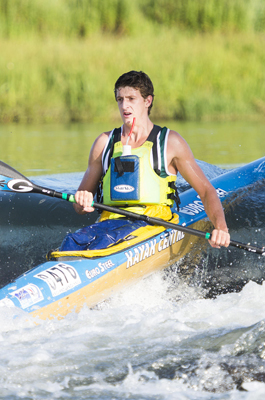 The steady rainfall that the drought-stricken region received recently has seen the river level rise sufficiently enough for organisers to remain confident the race will take place next weekend as initially scheduled, leaving Kime and the rest of the paddling fraternity scrambling to get their entries in on time.

“Provided this rain continues and we can get a race then I’m definitely in for Drak!” confirmed Euro Steel’s Kime enthusiastically.

“I had lost a bit of hope that the race would in fact even go a head up until a couple of days ago but it has been great to see the rain falling recently!”

While the river level came up recently, the drought continues and has left many wondering just what level will ultimately transpire come race day.

“Given the circumstances and the drought we’re going through, I think the ideal situation for most would be the more water for Drak the better!” said Kime.

“I wouldn’t expect a full river for Drak, unless we get a bit of a storm overnight of course.

“A low river would probably suit me quite well because of my skill set however a low river also suits a stronger fitter paddler because you’re constantly having to accelerate and a couple of the other guys are in really good paddling shape at the moment!”

Despite having raced to second place behind Birkett last year, a Drak Challenge title is not something occupying much of Kime’s attention.

A strong showing is however something he seeks, particularly ahead of his and Birkett’s Dusi title challenge.

“I don’t think I’ve ever gone into a Drak with my sights set on winning the race,” said Kime. “My focus has always been more on trying to get onto the podium.”

“With Drak being a K1 race and Dusi being a K2 championship year, the influence of Drak on Dusi is fairly unrelated.

“However, should both Andy (Birkett) and I manage to get ourselves onto the podium at Drak, it will definitely give us some good confidence going into Dusi!”