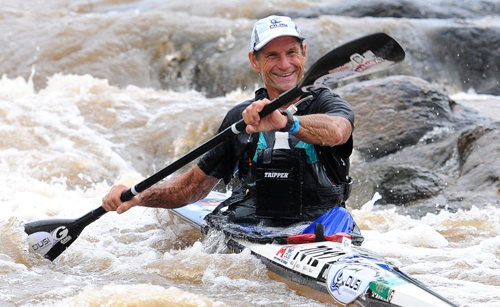 somehow never taken part in the popular two-day marathon on the Mzimkhulu River through the Southern Drakensberg and is thrilled to have the opportunity to add this to his extensive CV of paddling accomplishments when he travels up from the Cape for the race in early 2016.

Hawarden was a dominant figure in paddling in the heady pioneering days of the Dusi in the 70s and 80s and enjoyed a long reign as the undisputed mixed doubles champion of the race, before moving to the Cape in 1991, three years before the first Drak Challenge was staged in 1994.

“I suspect that I was last on the Mzimkhulu in about 1985, which makes it a brand new river for me!” said an excited Hawarden. “You have no idea how excited I am!”

“Whatever happens, high or low, just bring it on! I’ll be on a river again, reading it, hearing it, breathing it…and if I’m not careful I’ll be blowing bubbles in it and swimming for the bank in it too!” he laughed.

Hawarden’s trip came about as a direct result of an invitation to join the rapidly expanding Euro Steel team for the FNB Dusi in February, and the sponsors were happy to bolt on a debut in the Drak Challenge as part of his preparations.

He said that preparing for the race was made a lot easier by the wealth of quality information available online.

“I just love the technology that is used these days,” said Hawarden. “We used to get little brochures with an entry form and race instructions in the post before a race. With the N3TC Drak we have a whole website of information to play with!”

“They have video clips of eighteen rapids where you can sit on a guy’s head and he shows you the way through the rapid. That beats the hell out of sticking a map on your front deck of your boat like we used to do!

“I just love the names of the rapids:“Devil’s Toilet Bowl”, “Sani Stallion”, “Black Murray” and the next day you have to face up to “Numzaan”, “Tokolosh”, “Boat Gobbler”, and “Sneaky Puffadder”, to name just a few.

“Of course I’ll never remember them – names or lines – it’s just going to be a procession of fun,” said Hawarden.

While he openly admits that he will be a novice when it comes to learning the lines down the Valley of a Thousand Rapids, Hawarden has fond memories of the early days of paddling on the Mzimkhulu.

“I vividly recall watching a twinkling star through the rafters of someone’s barn somewhere on the Mzimkhulu,” recalls Hawarden.

“I remember Cotty Petersen borrowing a lawn mower and cutting a path back to his chalet so that he could crawl back late at night and still find his way!” he added.