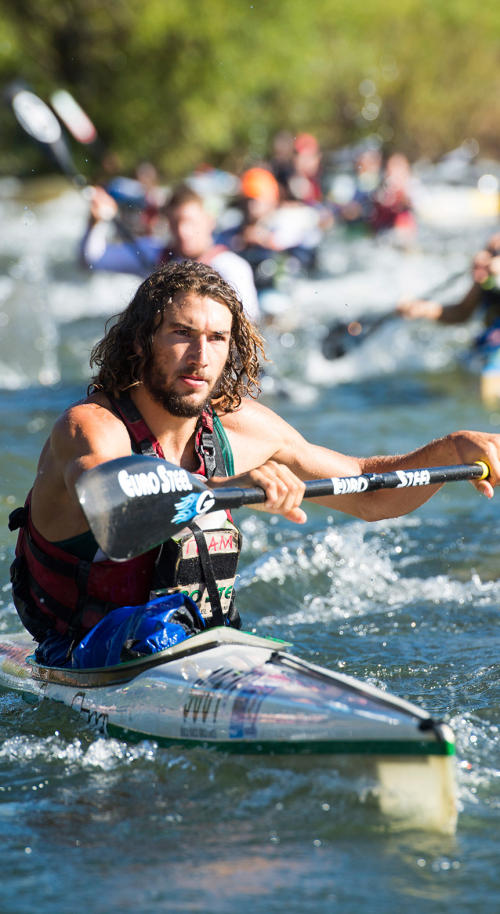 Two-time defending N3TC Drak Challenge champion Andy Birkett has confirmed that he will be back to contest the 2016 edition of the two-day race on 23 and 24 January, saying that he will be ready for whatever conditions the Southern Drakensberg weather throws at him.

“I am amped!” said Birkett. “It seems to have crept up on me and suddenly I am getting excited to be back on the Mzimkhulu again.”

Birkett’s summer season is focused on the 2016 FNB Dusi Canoe Marathon in February, where he will be paddling with his new partner, and former FNB Dusi K1 winner Lance Kime. The middle of January however will see the Team Euro Steel pair settle into their K1s as they prepare together for the Drak Challenge.

“It’s actually such good Dusi training,” said Birkett. “We spend a good few weeks training in Underberg because the river is such good fun and the water is so clean, and when it comes to running you are spoilt for choice.

“It is a technically demanding paddle, no matter what the river level is like. The first stage is not long but you are really tired at the end of it because it is so demanding.

“It is tough, stop-start paddling as there are so many rapids and shelves, and the racing is usually really aggressive because of that.

“That makes it excellent Dusi training as it really sharpens your boat skills. There is nowhere to hide on the Drak, especially on the top section,” said Birkett.

Having won the K1 title for the last two years, Birkett will start as the clear favourite to scoop a hat-trick of N3TC Drak Challenge wins and equal the record of three consecutive K1 wins held by Hank McGregor.

His Dusi partner, Kime, will turn into a serious adversary on the Mzimkhulu in January, as he also ranks the Drak Challenge as one of his favourite races of the year.

Birkett is not fazed by the currently low level of the Upper Mzimkhulu given the prevailing drought, and heaped praise on the organisers last year for their decision to run the race over its full 62km distance, despite the low river levels.

“Sure we all want full rivers all the time, but we have no choice with the current drought, and the Mzimkhulu in particular is heavily dependent on rainfall.

“At a low level it is still a fantastic paddle, and the fact that so many people enjoyed last year’s race from the top (from Castleburn bridge) when the river was low proved that it was the right decision by the race committee,” said Birkett.

Birkett and Kime will spend the first part of their FNB Dusi training phase in Plettenberg Bay, one of his favoured training destinations, before they move to the Southern Berg early in the new year to prepare for the Drak Challenge and the Dusi.