Andy Birkett scooped his fourth N3TC Drak Challenge title as he out sprinted the reigning world champion Hank McGregor at the end of a riveting 65km canoe marathon that also entrenched Abby Solms as the race’s most successful paddler when she won her seventh women’s title.

From the first stage start at Castleburn in the mist on Saturday morning it was clear that the title race was simply between McGregor and Birkett, the current number one and two ranked marathon paddlers in the world, with McGregor delivering one of his fabled end sprints at the end of the first stage to secure the overnight lead.

With the duo still inseparable with less than a kilometre to go, McGregor looked to be holding all the cards, as the Euro Steel team mates approached Wake Up Rapid.

“We were together the whole way – a game of patience and waiting for the other person to make a mistake,” said Birkett afterwards.

After being comfortably beaten in the end sprint at the end of the first stage, Birkett said that it looked like the writing was on the wall.

“Coming into the end of Day One I was taking strain just sitting on his wave while he was paddling in to the end,” said Birkett.

He chalked up the win to luck, which seems to have favoured him during his four title domination of this popular race through the foothills of the Southern Drakensberg.

“Something seems to happen in my favour every year just before the finish,” mused Birkett.

He was cautious about reading too much into the victory when looking at form for the FNB Dusi, now less than a month away.

“On the paddling front it is a confidence booster, but I know that the running throws a whole new aspect into it, so it is something that I am not too sure about,” said the Pietermaritzburg based star.

Owen Gandar repeated his third placed that stunned the race last year, proving that his giant killing effort in 2016 was no flash-in-the-pan.

In the women’s race Abby Solms became the most decorated paddler in the race’s 24 year history by becoming the first athlete to win seven titles. 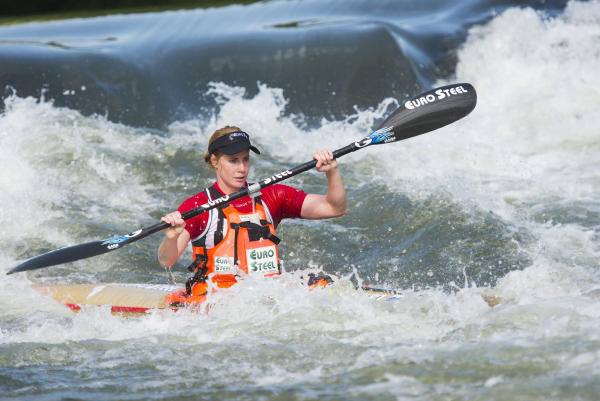 Starting the tough 39km final stage with over two minutes on Olympic ace Bridgitte Hartley, she managed to hold her off on the long flat stretches on the long final stage that she feared would be where Hartley would attack her.

“I was under serious pressure from Bridgitte, and the splits I was getting stayed at around a lead of 3 minutes and 20 seconds. That only changed when she took a swim in one of the last big rapids,” said Solms.

“I haven’t had to paddle as hard as that for a long time,” she added.

While many top paddlers tend to regard the N3T Drak as a stepping stone in their Dusi campaigns, Solms took a different view, and prioritised the Drak.

She was also placed under extra pressure with the news that she was poised to become the most successful athlete ever in the history of the race if she pulled off a seventh win.

“That definitely played on my mind before the race and during the final stage. It was basically only after I had shot Heaven and Hell Rapid that I could relax and take it all in.

“I think it is fantastic that I have been able to get to this point as woman. The men tend to get all the attention, and their race is clearly more competitive in many years. But this year the women’s field was really exciting,” said Solms.

Hartley wrapped up an impressive second, despite her late capsize, while an nervous Jenna Ward raced relentlessly to keep a large bunch of talented chasing women off her rudder.

The race was well supported by the paddling community, bucking a trend of falling race entries at major multi-day races.

Kirsten Oliver became the fourth person to join the Super Trout club after completing her twentieth Drak on a day notable for the absence of Owen Hemmingway, who before this race, was the only paddler to have finished ever single edition of this race. He was unable to get back from overseas business commitments in time to take part in the race this year.f falling race entries at major multi-day races.