The 2017 N3TC Drak Challenge got underway in misty, rainy conditions on Saturday however the racing at the front of the field was white hot as Hank McGregor won an end sprint to the line against Andy Birkett while Abby Solms laid down a significant marker when she powered to yet another stage win at the Swartberg Road Bridge.

As expected McGregor and Birkett got away from the rest of the field in the early stages of the day and they were unstoppable from there matching each other stroke for stroke right until the finish where McGregor got his nose in front towards the end and turned that into a one second advantage.

“The top section is always tricky and it can cost you if you break your boat or your paddle,” Euro Steel/Kayak Centre’s McGregor said after the stage.

“We managed to get away early and we both know where we are going on the river so it is quite hard to make a mistake unless you really have a lapse in concentration.

“I managed to get ahead of him in the last two kilometres and hold him off in the end sprint so I am really happy with the stage win,” he added.

With only a second advantage going into the final day it is going to be a tough final stage of the race and with a big push needed from both paddlers McGregor feels that it is going to be difficult to shrug off Birkett but he feels that he is in a strong position to win a race he hasn’t won since 2012.

“Anything can happen tomorrow but Andy knows where he is going and he has won this race a couple of times so it is definitely not over until we get across the finish line tomorrow.

“I definitely didn’t expend all my energy today because you never know when you are going to make a mistake and you might need that energy to catch up,” a conservative McGregor added.

After a tough day of racing Euro Steel’s Andy Birkett was happy with his stage one performance and having been out of action for a while showed his class at the front end of the field in good river conditions.

“I m feeling good after today and it has been a while since I did any racing so I am happy that I can still paddle at a reasonable pace,” he said with a smile at the stage one finish.

“We tested each other quite a bit in the top section which burnt a bit so I wouldn’t say it was a conservative approach today!

“The water level is a little bit higher than last year which means it is a bit more forgiving and beggars can’t be choosers and it was still great fun out there. It was quite challenging and you have to look sharp and pick your lines well.” 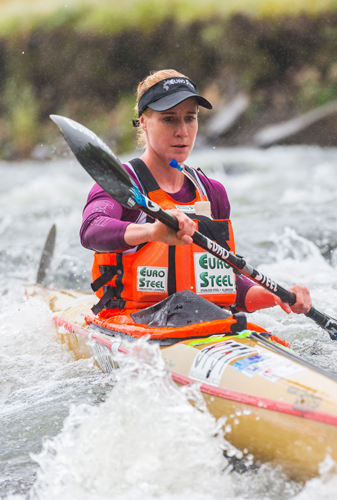 Euro Steel’s Abby Solms showed her class and prowess on the uMzimkhulu River when she dominated the ladies field to record the sixteenth fastest time of the stage and take a two minute advantage into the final stage.

“Today I had to push so hard, it was basically a time trial from start to finish,” Solms commented.

“We’ve never had Bridgitte (Hartley) racing so well and she is such a strong paddler so tomorrow is going to be super hard work but I am looking forward to it.

“It is really nice having such a strong women’s field and we were talking about it on the start line saying we have never had this many girls entering Drak so it is great that we have such a strong field!”

Hartley, who was only taking part in her second Drak Challenge, was slightly apprehensive going into the first stage of the race but the Olympic bronze medallist was happy with her performance.

“I could see Abby most of the way from the start but when I got stuck behind some paddlers I lost her but once I was through Black Murray I knew that I could push to the end because the biggest obstacle for the day was done.

“I was hoping that I could close the gap on Abby towards the end but I am not unhappy with my race,” Hartley added with a smile.

One of the performances of the day came from Hilton College pupil Hamish Lovemore who finished the day in fourth place overall just behind Owen Gandar.

Lovemore’s elder brother Tom currently leads the Under 23 category just ahead of Murray Starr and Alan Houston in third.

In the ladies race, Euro Steel’s Jenna Ward is third just under two minutes ahead of a pack that includes Kyeta Purchase, Kerry Segal and Under 18 star Christie Mackenzie.

The second stage of the 2017 N3TC Drak Challenge takes place from the Swartberg Road Bridge to the uMzimkhulu River Lodge 22 January 2017.