Defending women’s champion Jenna Ward has cleared her diary in a bid to defend her N3TC Drak Challenge in partnership with FNB title, saying the two-day classic in the Southern Berg is a not-negotiable part of her annual canoeing plans.

The 27 year old Durbanite, who scooped her maiden Drak title in 2018 and then won impressively last season, pointed out that the technical difficulty of the race meant that there was no room for error.

“It’s one of those races where you sim 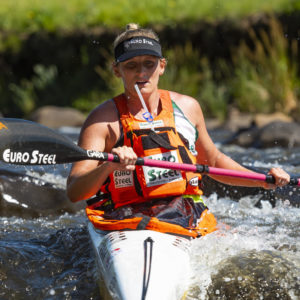 “It is a technical river, so you have to focus on yourself and try not to make a mistake, because that can make or break your race.”

Ward believes that will count in her favour, having accumulated significant knowledge and experience over twelve years of racing the Drak Challenge.

“I am hoping to rely on some of my past knowledge to get an upper hand on the river,” she said.
“The women’s race at the Drak is always hotly contested, and every year we see great quantity and quality to the women’s field.

“Women’s paddling in South Africa is so strong right now, and the Drak gets one of the strongest women’s fields of the year.

“There is also a lot of talent coming through the junior ranks. They like to focus on river paddling so we always see some strong performances from the junior girls,” she said.

Ward is a regular tripping, training and racing on the uMzimkhulu during the December holidays, but in a departure from her routine she will be holidaying in the Eastern Cape, but says that will bring her to the Drak start line fitter than normal, particularly as she is working towards a strong MyLife Dusi challenge three weeks after the Drak.

“I love the challenge of the Drak and it is one of my favourite races on the calendar,” said the Team Euro Steel star.

“I always watch the Drak Facebook page and if there is water in the river I have no problems taking a drive up to Underberg to get on the river.

“It comes at a good time for my Dusi training,” she pointed out. “It’s not too close to the Dusi, but close enough to allow you to judge how all the other women are doing.

“There is no portaging in the Drak so it gives my legs a bit of time to recover from the Dusi training,” she added.