Olympic medallist Bridgitte Hartley has set her sights on adding the women’s title at the N3TC Drak Challenge, in partnership with FNB, to her CV, as her foothold on the domestic river marathon scene strengthens after a successful 2018 season. 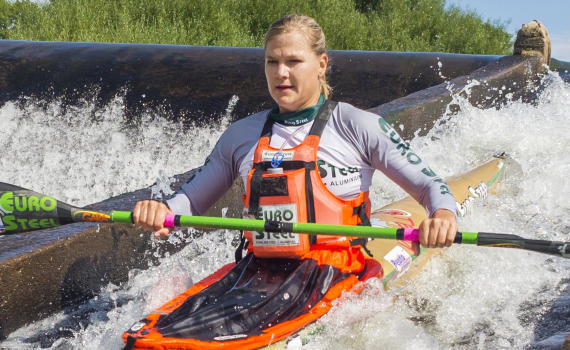 She impressed winning the recent Hansa Fish River Canoe Marathon in Cradock, making her the reigning SA K1 women’s champion, and she is gradually ticking off the major races that she wants to win.

She has been a regular fixture on the FNB Dusi podium in recent years but hasn’t bagged that title yet, and she says that, as a fan of the uMzimkhulu River in the Southern Drakensberg she really wants to win the women’s title there.

“I would definitely love to win a Drak,” said Hartley. “Like the Fish, it is on my bucket list. I have won a Fish now and would really like to win a Drak as well.

“The Drak is definitely one of the most fun river races on the calendar, even if it is low, and the clean water is a big attraction,” said the Pietermaritzburg-based Euro Steel team racer.

Hartley is keen to erase her disappointing race last year when she was fancied to do well but battled in the low river conditions.

“I trained really hard and I thought I could win it, and to come third was such a challenge,” she said. “It was the trickiness of the rapids and rocky river that I battled with.

“Two years ago in an medium river I had so much fun, and if I can get in the tripping before the race I am sure I can get a better result,” she said.

She pointed out that the very high standard of women’s canoeing at the moment will make winning the Drak tough for any elite female racer.

“With the standard and number of top women at the moment, and with a K1 Dusi coming up, there will be a lot of top girls putting in the miles for the Drak over the December holidays,” she said.

Hartley’s relationship with the uMzimkhulu has not always been that rosy. She was mercilessly beaten into submission in the full river in 2013, when she was trying to establish herself in river races.

“I probably shouldn’t have taken part in that race because I was definitely a novice to rivers. The juniors and less experienced paddlers were stopped from racing, but I went. Looking back it was a stupid idea!”

“I was so unstable in the boat that I realised then that I had to do something about it and start sharpening up my river skills, getting used to sitting lower in a river boat and learning what paddles work best in the river,” she recalls.

Hartley will be blocking off time in December to train on the uMzimkhulu river and master the lines through the rapids, and promises to be a force to be reckoned with in January. But she says she is willing to be patient.

“I always say that the river races will always be there, forever. I can’t do flatwater sprinting forever. I am in no rush,” she concluded.