Paddlers entering the N3TC Drak Challenge in partnership with FNB will have the option of entering in a team following confirmation from the race organisers that they will retain the format that was introduced as an experiment last year. 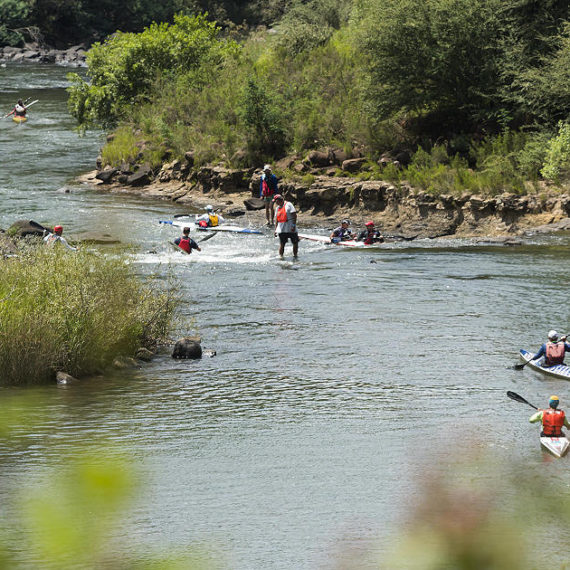 The concept is largely social and allows two paddlers to enter as a team and opt to paddle the first day in K1s, and if the water conditions suit they can change to a K2 for the second day.

“Day One is normally best suited to singles, especially through the Valley of a Thousand Rapids,” said race committee head Lloyd Riggien. “Day Two has a lot more flatwater that lends itself to doubles racing.

“This class is totally non-competitive and is aimed at a pair of mates who want to paddle together and look after each other through the whole race,” he explained.

“We saw work colleagues enter as a team last year and a few parent-child combinations and the feedback we got is that they really liked the idea, so we have decided to retain it again this year,” he said.

Paddlers keen to enter as a team simply need to register their team at registration at the Underberg Country Club on the day before the race starts, and they will be batched together for the first stage.

The race has always been flexible with paddlers changing from K2s to K1s if the river looks like it is going to be low on raceday, but Riggien said that the reverse would also apply.

“If we get a big storm and the river comes up, the team can opt to do the whole race in their K2,” he added.

The character of the race is heavily dependent on rainfall in the days preceding the race, and thunderstorm in the catchment area around Bamboo Mountain can dramatically alter the river level for the race.

Last year the 25th anniversary edition of the race was held on the lowest river level for the race, and a significant percentage of paddlers opted to race in K1s.

“The race has always been a K1 championship race, and we really encourage paddlers to use K1s as the nature of the river suits singles rather than doubles,” said Riggien.

“The team event just adds another layer of camaraderie to a race that has a great social vibe, and I expect more paddlers to go for the social team option this year.

“It is not a racing class, and I think we gave the first team home last year a lemon meringue pie!” Riggien concluded.

The 2019 N3TC Drak Challenge, in partnership with FNB, starts at Castleburn on Saturday 19 January with a 26 kilometres stage to Sinister Pool, just above the Swartberg Road bridge. The second stage on Sunday 20 January is 36 kilometres long, finishing at Early Mist Farm close to Coleford resort.