Eleven times world champion Hank McGregor has made no bones about the fact that he wants to win the N3TC Drak Challenge in partnership with FNB on 19 and 20 January 2019, and phoned his friend and defending champ Andy Birkett to warn him that he wants to reclaim the Drak title he last won in 2012. 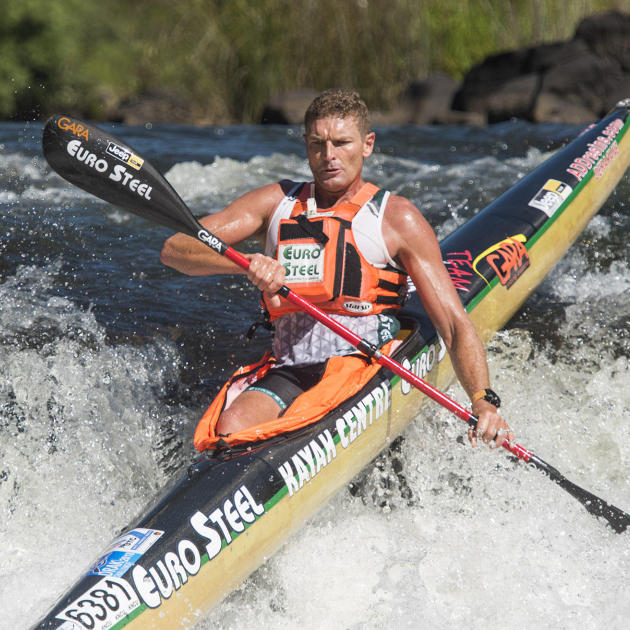 “I told Andy that he is welcome to go and win the FNB Dusi or the world champs or anything like that, but the Drak is mine!” said McGregor.

McGregor won a hat-trick of victories between 2010 and 2012 at the hugely popular Underberg-based race on the uMzimkhulu River but since then he has lost a number of thrilling tussles with his Euro Steel team mate Birkett, most of them through a single small mistake on the river.

“In the Drak it is all about river skills,” said McGregor. “You have to stay smooth and stay clean. You can’t win it with brawn.”

McGregor and his family will be holidaying in the Underberg area around Christmas and will stay on to race the FastDrak that covers the entire two-day Drak Challenge course in a single day with some long portages.

“I love doing the FastDrak but this year I will be doing a lot of tripping on the river to learn where every single rock is!” he said.

“Last year I got stuck on a rock on Glenhaven Rapid and that gave Andy enough of a lead to get away. Before that I got bumped in the last rapid before the finish.

“At the Drak there is nothing in it. It takes the smallest mistake to let someone get away, which makes it pretty entertaining. One deflection, one wrong channel and it’s over,” said the 41 year Durban man, who will be enjoying the holiday training with his family, which has expanded with the recent birth of his second son Max.

“I love everything about paddling on the uMzimkhulu but I want to make to perfectly clear to everyone, including Andy Birkett, that getting the Drak title back is my main priority for 2019,” he said with ominous conviction.