Andy Birkett paddled to a runaway victory in the 2020 N3TC Drak Challenge in partnership with FNB and in the process became the sole holder of the record for the most number of titles in the Underberg classic.

Going into the 27th edition of the two day 75 kilometre race on the Mzimkhulu River Birkett shared the record for the most number of wins with Ant Stott, with six titles each.

He started the tough 38 kilometre final stage from Swartberg Road bridge to Hopewell Farm with a two minute lead over Hank McGregor, and in a juggernaut performance the Euro Steel racer more than doubled his lead before he arrived at the finish of the race. 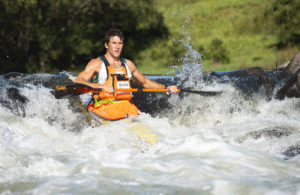 “I really am not one for records at all,” he deflected. “Every race is different, and each race you start is a totally new challenge.”

“I come to Underberg every year because I really enjoy paddling this river, and enjoy the whole weekend of activities here,” he said.

“This race and the regions means such a lot to me that to be able to win it again has special significance to me,” he added.

Racing on a low and testing Mzimkhulu River Birkett powered away in the elapsed time start to try and stretch his lead paddling through the Underberg Gorge.

“I kept on looking over my shoulder to see if Hank (McGregor) was coming!” he added.

He needn’t have worried as his determined solo charge saw his lead balloon to over seven minutes by the time he was the first boat across the line.

McGregor said his solitary race, with Birkett out of site and several minutes clear of the chasing Under 23 speedster Hamish Lovemore, allowed him to focus on maintaining his own pace throughout the day.

“I was kinda in no-man’s-land! So I could chill out and focus on my own race, and with more water than the first day it was a lot more forgiving for the heavier paddlers,” he said.

Lovemore wrapped up third ahead of the dogged Stew Little, with Khumbulani Nzimande posting the second fastest time of the final stage to leap-frog up to fifth overall.

The women’s race title fell to Jenna Ward for the second time, as she raced a tactically astute race to protect her first stage lead and avoid any exhaustion or technical mistakes on the long final stage. 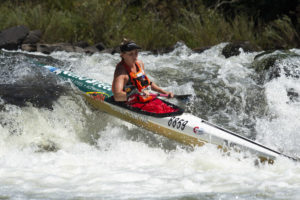 Ward was impressive in not making any mistakes in the myriad of rapids littered with rocks, made technically difficult by the low river conditions.

“It feels unreal to have had two flawless days!” she said.

Behind her however the race’s most notable performance came from Bridgitte Hartley. After a nightmarish first stage that left her a distant sixth, she decided to stage a herculean solo charge, arguably fuelled by her frustration from the first stage.

Leaving everything out on the water she posted the fastest time in the women’s race on the final stage by five minutes to blitz onto the podium and claim third from Tamika Haw.

The event was well supported by a huge field of paddlers who enjoyed the weekend filled with activities under the umbrella of the FNB Drak Adventure Weekend.