The East Londoner started cautiously and had to pick his way through the frantic seeded A batch. But by the time the bunch emerged from the Valley of a Thousand Rapids that defines the first ten kilometres of the stage, Birkett was firmly in the lead.

On the flatter waters into the finish at Sinister Pool, Birkett fired the afterburners to open up a two minute lead over eleven-times world champion and Euro Steel team mate Hank McGregor, with Hamish Lovemore edging out Underberg local Stew Little and Alan Houston for third place overnight.

Birkett said he found himself playing catch-up from the outset after battling with the congestion at the Le Mans start. 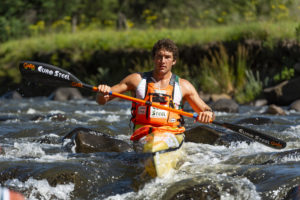 “I know I am not the fastest guy over a hundred metres!” he quipped. “With a bit more water you can put in a sprint and catch up by the first rapid, but I didn’t manage to do that until after Black Murray (rapid, ten kilometres into the race).”

“I was following Hank (McGregor). He was leading our charge. When we caught the three boats at the front I managed to put in a surge in a small rapid and then put the hammer down,” he explained.

McGregor, who is working his way to top form after being sidelined by a persistent shingles ailment, said that he struggled to stay in contention.

“It seemed like the lightweight youngsters seemed to rock-hop over rocks a lot easier than I could,” he said. 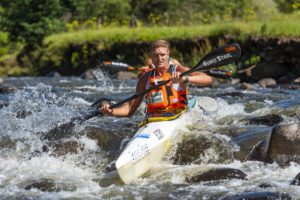 McGregor caught Birkett and they started closing in on the trio leading the race as they approached Black Murray rapid.

“Andy managed to scrape in ahead and I was caught at the back of the pack, and he started to open up a gap.

“I am actually stoked to be back racing,” he added. “It has been a long couple of months.”

Jenna Ward has taken a big step closer to a second Drak title with an almost flawless race on the rocky low river that managed to trip up most competitors. 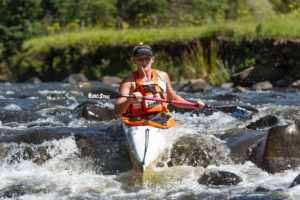 “I had an absolute ball on the river today. It was flawless, which I can’t complain about!” she gushed.

“I had the intention of getting away on my own today, so I was going really hard at the beginning,” she explained.

“The second stage is a long one. There is a lot of flat water so we will have to pace ourselves,” she added.

She took the first stage by a minute and a half clear of Dusi champ Christie Mackenzie, with the Haw siblings Tamika and Bianca finishing alongside Hilary Bruss in the chasing bunch.

Mackenzie had a great start, but ran aground allowing Tamika Haw and Ward to get ahead early on in the stage.

“I didn’t want to get ahead of myself as it was pretty much single file at the top. Jenna just managed to get further and further away from me at the front,” said Mackenzie.

She staged an impressive charge back in the final ten kilometres of the stage, and managed to halve Ward’s lead.

The race had been scheduled to start under low level rules, but rain in the mountains added just enough water to the river system to enable the big field to start at the traditional start at Castleburn.