Having withdrawn from the 2016 N3TC Drak Challenge with illness halfway through, 2012 champion Hank McGregor feels that a different approach to the race is in order as he prepares to take on the 2017 river marathon season after a successful period in his surfski when the popular Drakensberg showdown takes place from 21-22 January. 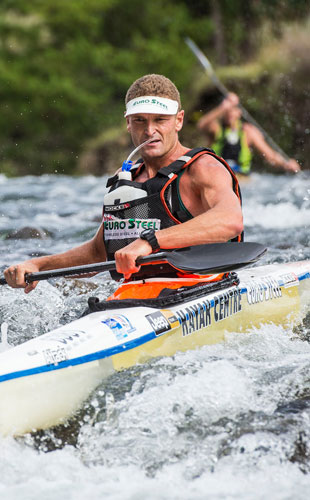 Having not won the race in four years the Euro Steel/Kayak Centre ace has reassessed his approach to the race and with some strong competition coming from three-time defending champion Andy Birkett he’ll hope his new approach can break his long-standing Drak duck.

“Although I haven’t been in a river boat since the Hansa Fish I am currently really race fit,” McGregor mentioned.

“It’s been a huge couple of months for me in my surfski but now that I am home I am reassessing how I build up to Drak and am going to take a more professional approach to the race later this month and really give it a good go.

“From my boat to my paddle to my training, I really want to be on top of my game when I get to the start of the race. I took some time over the Christmas period to get up to Underberg to do some tripping on the river as well,” he added.

McGregor did the 60km FastDrak in a mixed double with his wife Pippa, finishing third overall, and providing an excellent opportunity to scout the river in a race situation.

McGregor, who finished second at the 2016 FNB Dusi Canoe Marathon with long-time partner Jasper Mocké, threw the majority of his eggs into that basket at the beginning of 2016 but feels he has been able to maintain his levels that he reached back in the early part of last year.

“I am feeling really good after I had tough start to 2016 and have been keeping up my running levels which is different to previous years.

“Having had such a busy schedule with 45 flights last year I still feel good and after the Cape Point Challenge I will refocus my efforts on the river with another big season ahead,” a relaxed but focused McGregor commented.

With drought conditions gripping most of the country the Drakensberg has received a sprinkling of early Summer rain which has meant that the river is at a level where it is paddleable however water level is not something that McGregor is too concerned about.

“It would be nice to get a bit more water to make it easier for the rest of the paddlers but for us as professionals we shouldn’t have to worry about the amount of water in the river.

“The whole weekend is great for us as a family and just getting into the Drakensberg for those few days is really special and to be able to race at the same time is a bonus!” added McGregor.

With Birkett having established himself as the man to beat in the KwaZulu-Natal river marathon season over the past few years, McGregor has put the ball firmly in the court of the three-time defending champion stating the pressure will be firmly on him going into the two-day showdown.

“Andy is really at the top of his game and is always such a tough paddler to go up against.

“I do think that he has it all to lose at Drak next year,” McGregor said.