In a rare paddling double Andy Birkett and Abby Adie successfully defended their men’s and women’s titles at the N3TC Drak Challenge on the tough 38km second stage from Swartberg bridge to Early Mists Farm on Sunday.

Birkett (Team Eurosteel) started the final stage on an energy-sapping low Umzimkulu River with a two minute lead over reigning Dusi K1 champ and team mate Lance Kime, who in turn was being hunted by five times world champion Hank McGregor (Team Jeep/Kayak Centre) less than two minutes behind him. 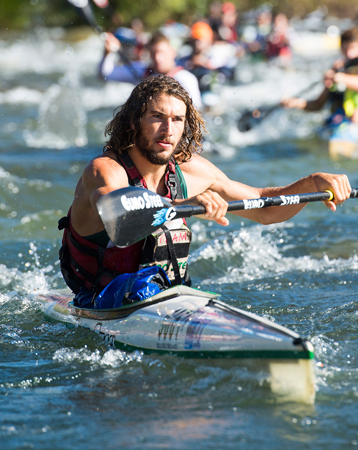 Birkett targeted the first hour into the Underberg Gorge to try and put space between himself and his classy chasers, a move that paid handsome dividends as he increased his lead by the time he reached Callaway Bridge at the end of the Gorge section.

Buoyed by the splits Birkett was able to put his ears back and race unchallenged to the finish to retain the title he won in dramatic fashion last year in a thrilling tussle with McGregor that was decided in the final half an hour of the race.

Birkett came into the race battling with a stomach ailment, and said he was surprised at how well he was able to race over the two stages of the race.

“It was a tough day of paddling out there on the river,” said Birkett, “It wasn’t that low that I got stuck but conditions made for very tough racing on the low river.”

“I decided to go hard early to set up a buffer and hopefully demoralise the other guys. That way I could blow and still be able to hang onto my lead.

“I honestly didn’t expect the win and I am stoked to get a second Drak title,” said Birkett.

Kime was elated at his first Drak podium, and said that it had been unnerving to have a paddler of the calibre of Hank McGregor chasing him.

“Every so often I could see him at the end of one of the long straights, and that gave me new energy to keep going,” said Kime.

“Apparently by the time I got to Glenhaven Rapid I had managed to make up some more time. It is spooky to have someone of the calibre of Hank McGregor behind you. I actually told everyone at the start that my plan was to see how long I could hold him off on the final stage.”

“To be able to hold him off all the way to the finish was unbelievable. I am stoked to have made the podium at the Drak,” said Kime. 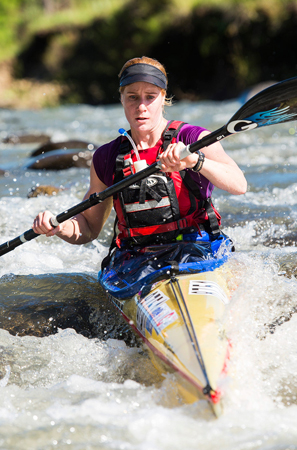 gor wrapped up third, despite a mishap that injured his shoulder when he collided with a rock in the testing low river conditions. McGregor held off a resurgent Grant van der Walt in the sprint finish for the last spot on the podium.

Adie provided another flawless display as she romped away to win her fifth Drak title, from Laura O’Donague and Under 23 World Champs medallist Jenna Ward.

Adie, who has always held the Drak Challenge as one of her favourite outings of the year, said she took great confidence from her all round performance at the race.

“This year I came into the race putting quite a bit of pressure on myself, wanting to tick another one off, and I am so glad to have done it,” said Adie.

“The low river and the technical demands suit me, and I loved it. The girls had it a bit easier because we are a bit lighter.

“Yesterday on the shorter technical section you could get away with just your skills, but on the long final stage there was nowhere to hide. I am really happy with where I am at the moment.

“This race is one of the highlights of my year. I always come here to race and hopefully I can get a few more under the belt,” said Adie.