An air of mystery and intrigue hangs over the N3TC Drak Challenge that takes place on the uMzimkhulu River outside the Southern Drakensberg town of Underberg this Saturday and Sunday as forecasts of thunderstorms, capable of replicating the drama of 2013 when the river level changed from low to flooded overnight, contrast the current drought conditions starkly. 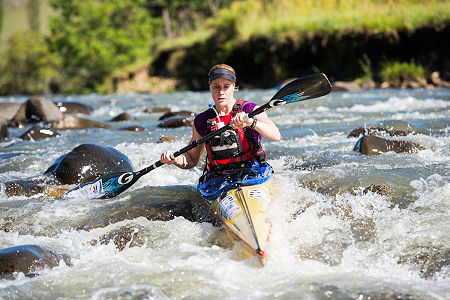 Late summer storms in the catchment area have helped top of the ground water table and establish a base flow that has allowed the organisers to start the race at the traditional start at Castleburn, triggering a deluge of last minute entries for the popular two-day 62km race.

But whether Andy Birkett bags a third win to complete a hat-trick of Drak Challenge victories, Hank McGregor can celebrate his birthday on Sunday with a fourth title or a maiden winner’s name is inscribed on the trophy will be largely dictated by the condition of the river after Fridays night’s forecast thunderstorms.

Regardless of the weather though, the popular event, which also doubles as the opening leg of the International Canoe Federation Classic Series, is set to produce yet another mouth-watering weekend’s racing.

The hugely talented quintet will however be closely challenged by the next tier of South Africa’s endless river marathon talent pool, all eager to mix it up with the best in the business and earn a podium or top five finish at the coveted KZN race.

Brandon van der Walt (Euro Steel/Kayak Racing), Owen Gandar and Andrew Houston (USN) have all impressed in this race previously and have a love for the uMzimkhulu River that may well see them become the cat amongst the ‘big five’ pigeons.

The race for the final few top ten positions is likely to be just as fascinating as the challenge for the overall spoils with former Surfski World Champ Sean Rice, 2014 Dusi winner Sbonelo Khwela (Euro Steel/Red Bull) and 2015 Hansa Fish winner Greg Louw (Knysna Racing/Merrell) all having confirmed their participation.

Jakub Adam will add an international flavour to the mouth-watering mix with the Czech Republic star hoping for a strong showing in Underberg this weekend ahead of his FNB Dusi Canoe Marathon assault with Jason Graham in February.

The women’s race will be no less enthralling as Abby Solms looks to continue her remarkable stranglehold on the event that has seen her claim five of the last six ladies titles.

The Euro Steel star will however undoubtedly be pushed hard by 2014 and 2015 Under-23 Marathon World Championships bronze medallist Jenna Ward while Jen Theron, Tamika Haw, Hayley Arthur, Donna Tutton and Kerry Segal look set to battle it out for the remaining top five places.

The 24km opening stage of the 2016 N3TC Drak Challenge from Castleburn to Swartberg Bridge gets underway at 08h00 on Saturday, 23 January.