The organisers of the weekend’s N3TC Drak Challenge have given the green light for the popular paddling race to go ahead as scheduled on Saturday 23 and Sunday 24 January, ending months of speculation about the water level in the uMzimkhulu River that has been hard hit by drought.

Following a thunderstorm high in the Southern Drakensberg that sent the levels of the river up by over half a metre last week, race committee members have been closely monitoring the level of the uMzimkhulu at four points along the 65km race course and have been gratified to see that the surge has had a significant positive effect on the overall river level. 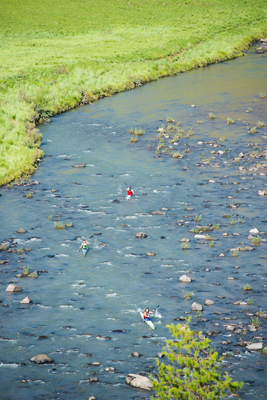 “We can now confidently say that the race will go ahead this weekend and we have all the infrastructure heading to Underberg this week ahead of the race,” he added.

“At worst it will be a low level start at the Trout Hatcheries, which our paddlers are familiar with,” said Cole. “There are thunderstorms forecast for every day this week though, including decent rain forecast for Friday, and if that falls in the right place then we will not hesitate to start the race at the usual start at Castleburn.”

Last year the race bosses took the courageous decision to start the race from Castleburn despite the river running at a level below the footings at the bridge, which had been for many years the widely accepted cut-off level for racing from the top of the river.

The big field of paddlers responded warmly to this decision and almost all of them thoroughly enjoyed the technical demands of the Valley of a Thousand Rapids at a low level, including eventual race winner Andy Birkett who showered praise on the race organisers for their brave decision.

The race has been providing daily photo updates of the river levels on their website, Facebook and Twitter accounts to ensure that paddlers are fully aware of exactly what is happening on the river.

The event has also bent over backwards to accommodate uncertain paddlers by scrapping their early entry deadline, dropping late entry penalty fees and extending entries until 6pm on Thursday, 21 January.

In 2003 the race took the decision to make the N3TC Drak Challenge a K1 race for the competitive paddlers.

“This section really is best suited to K1s, no matter what the water levels,” said Cole. “We have always allowed paddlers to bring up both K2s and K1s to the race, and if they have entered in a K2 and they see that the river is not that full they can easily swop to K1 entries.”

The efforts have not gone unnoticed by the paddlers, who have been on the receiving end of several races being cancelled due to low river conditions this summer.

“It can’t be easy, especially with the terribly low river, but you have kept us updated every day and you truly have the paddlers’ best interests at heart,” said paddler Pete Jacobs on the N3TC Drak Challenge Facebook page.

“It reminds me of why we love this race… it’s paddling in its purest form, on what nature provides us on the day. Hopefully we see some good rain falling for the race!” he added.

The race committee has vowed to keep up the daily river updates during the week and encouraged keen paddlers to follow their Facebook and Twitter updates.

“If we have serious rain on Friday night then the final call on the race start will be made early on Saturday morning” said Cole. “So it is imperative that paddlers keep an eye on our social media accounts and our website if there is any uncertainty.”