When Kirsten Oliver completes the 2017 N3TC Drak Challenge on Sunday 22 January she will become the fourth paddler to reach the elusive milestone of completing the popular two-day race twenty times. 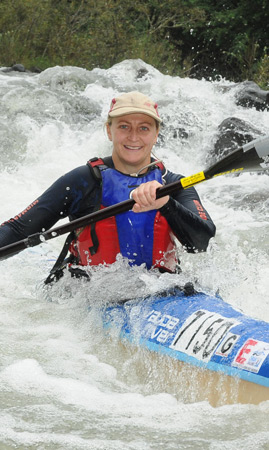 The prospect excites the bubbly 38 year old Deputy Director of Conservation Projects at Wildlands, who rates the 65km outing as the highlight of her paddling year.

“It is my absolute all-time favourite race,” gushed Oliver, whose family is steeped in canoeing in KwaZulu-Natal, having grown up with parents who were the backbone administrators and timekeepers for the sport in the region.

“It is the epitome of a canoeing experience,” she adds. “The race is so well run, the people there are great, the water is clean, the scenery is fantastic and the whole vibe around the event is fun. It is just an all-round fantastic weekend.”

She was part of the big field that assembled for the inaugural race in 1994, an experience that she finds hard to forget.
“I think I got about three kilometres into the race on that flooded river. I took a horrendous swim and just managed to get myself and all my kit to the bank.

“Then I just sat there and watched all these boats drifting past me! I eventually gave my splash cover to somebody and walked out of the valley,” she recalls.

“But it wasn’t all bad,” she adds. “I landed up meeting someone who is now a good friend as we walked out together and got a lift from a passing motorist.”

Since then she has been back almost every year, bar when work commitments have kept her away from the race on three occasions.

“In 2004 I had to go to a work conference that required me to drive through Underberg on the morning of the first day, an experience that made me sick to my stomach! I was totally miserable,” she remembers.

Paddlers that have completed five or more Draks are entitled to start in the preferential Drak Batch, and Oliver looks forward to sharing the race with fellow stalwarts who have done most of the races in years gone by.

2013, the only year to match the testing flood conditions of 1994, is still indelibly etched in her memory.

“I drove to the race with my dad (timekeeper John Oliver) and when I saw the level of the river I just said ‘OK, let’s go and find somewhere for a long lazy breakfast’ because I was terrified!

“Then I chatted to other paddlers with far less experience than myself, and my attitude changed enough to actually start the race. It was amazing. No swims. But I will concede I was terrified the whole way!” she recalls.

Some of her memorable Draks are based on friendships or experiences off the water.

“One year I remember having such a great weekend with Claire Lindsay and some Durban guys. We raced well, and then had such a great evening at the Saturday night party. Perhaps the Sunday’s racing wasn’t quite as fast, but it was just such a fun weekend,” says Oliver.

She is excited to become the fourth paddler to reach the milestone of 20 Drak finishes, with the pace still being set by Owen Hemmingway, who is the only paddler to have finished all 23 Drak Challenges.