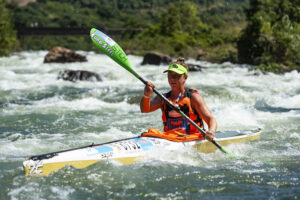 The former Dusi winner has made Underberg a favourite training base and spent many hours training on the river at all water levels, and her knowledge of the rocky river proved decisive as she raced through the strong field that assembled for the race.

“We weren’t quite ready at the start and we found ourselves behind at the start,” said Peek. “By the time we got to Taylor’s weir we had managed to get back to fourth.

“We saw Stew Little and Saskia Hockly stop to swop around because they were getting stuck quite a lot in the low river,” she said.

At the halfway point at Scotston’s Bridge Peek and Fourie were lying third, and continuing their flawless day they capitalised when Matt Millward and Melonie Croeser had to stop to straighten a bent rudder just below The Mineshaft weir.

Peek’s river knowledge paved the way for them to grab the lead at Dog’s Leg rapid when leaders Jack Edmonds and Tracey Oellermann ran aground taking a risky line down the left of the rapid.

The pair hung onto the lead in a thrilling final fifteen minutes and had enough of a lead to survive a scare at Glenhaven rapid, less than a minute from the finish line, to wrap up a satisfying victory.

“It was such great racing!” gushed Peek, who admitted that the many hours tripping the river had made all the difference.

“This river is always changing, and we spent the week before the race tripping it,” said the Euro Steel racer. “You get to learn so much more about the river tripping it at low water levels, and that knowledge is always handy.”

Excited by the result, she can now set her sights on the N3TC Drak Challenge at the end of January, as a key part of her preparations for the MyLife Dusi three weeks later.

“The Drak is a great race to do well at because the field is always so strong,” said Peek.