The fun-loving sport fanatics who make up The Cows have set their sights on the N3TC Drak Challenge canoe marathon in the Southern Drakensberg on 20 and 21 January, aiming to add momentum to their national fundraiser for the CHOC Childhood Cancer Foundation.

After launching a ‘Paddling Herd’ at the Fish Marathon in October, The Cows are hoping to establish a sizeable group for the popular two day race through Underberg, and to create critical momentum that will carry them through the rest of the summer paddling season, including the FNB Dusi Marathon in mid-February.

“We are heading into classic dairy country, so it makes sense that we try and establish a big herd for the N3TC Drak Challenge,” said The Cows co-ordinator Daisy.

“From a handful of Cows taking part in the FNB Dusi last year, we got a great Herd together at the Fish, and more importantly, plenty of other curious paddlers were asking about how to join in,” she said. “Now is their chance.”

The Cows celebrate their tenth anniversary this year, and are aiming to raise R10 million for the CHOC Childhood Cancer Foundation to commemorate this milestone. They support CHOC Houses at major hospitals around the country that allow children receiving treatment for cancer to stay with their parents.

The black and white cow-patterned rash vests and paddling shorts were an instant hit at the Fish Marathon, and now paddlers are being invited to join the Paddling Herd, which has a strong emphasis on fun and camaraderie.

“The organisers of the N3TC Drak have been fabulous to us, so we can offer a lot to paddlers that join the Paddling Herd,” said Daisy.

Each paddler needs to commit to raising R5000,00 during the calendar year, which is usually done through a GivenGain online account, ensuring that every cent raised goes to CHOC.

The paddler receives a rash vest 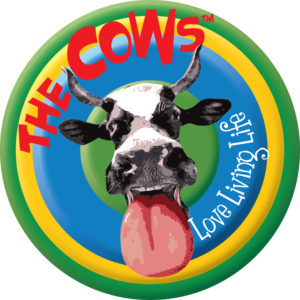 and paddling shorts in the famous Cow livery, and a lot of added benefits at the Drak Challenge.

“We have been given a Cows batch on both days, so that all the Berg bovines that want to paddle together can enjoy each other’s company, and give it horns,” said Daisy.

“We will meet for a pre-race graze at The Grind in Underberg, where the members of the Paddling Herd taking part in the race will get a burger or pizza and a glass of wine or a beer,” she added.

“We are also so excited that the organisers of the FNB Drak Music Experience have given us a ‘Paddock’ right at the front row of the music concert at the Country Club on Saturday afternoon so we can moo our appreciation to Matthew Mole and the other musicians,” she said.

Daisy confirmed that paddlers who were already part of the Paddling Herd through their involvement in the last Dusi and Fish Marathons were welcome to take up a place in The Cows batch and enjoy the other benefits at the Drak weekend.

Paddlers simply need to enter via the race website and then email Daisy on daisy@thecows.co.za to register for the Paddling Herd.