As the surprise package at the 2020 N3TC Drak Challenge in partnership with FNB, Team MyLife’s Khumbulani Nzimande is hoping to replicate his scintillating day two form by backing it up with a strong day one at the Southern Drakensberg classic from 30-31 January 2021. 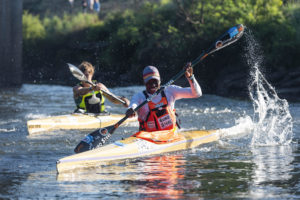 Nzimande showed his huge promise when he powered to the second fastest time on the second day of the Drak which catapulted him from eighth overnight to fifth position overall and sounded some significant alarm bells for what’s to come from him.

Just a month later he went on to win the MyLife Dusi Canoe Marathon in a K2 with Andy Birkett and officially announce his arrival on the national river racing scene.

Nzimande cut his teeth on the uMsundusi and uMngeni Rivers as part of Martin Dreyer’s Change a Life Academy so his ability to run with a boat on his shoulder is a big strength of his. With no portaging during the Drak Challenge he managed to show that he is developing his all-round paddling skills too.

“I think the toughest part of the Drak is that there aren’t any portages for me to get out and stretch my legs,” Nzimande said.

“That’s when it does get quite tough but I think that it’s definitely my second best race of the season behind the Dusi and I want to do better in 2021 than I did this year.

“Being able to speak to Andy (Birkett) during the race was great because he told me that on day two I can use more power and that’s what I did which helped me finish in fifth place.”

Many Dusi specialists seem to battle more when it comes to the Drak Challenge as it poses more of a technical challenge and there is no running involved which benefits the stronger paddlers. Nzimande is hoping to become a strong all-round paddler.

“I find that training on shallow rivers gives me a good chance to work on my technical skills and those are important at the Drak because it is a technical river and the river is very reliant on the rain.

“When I paddled day one this year I was a bit worried but I managed to do well on the second day because I had more power but I’m excited for the race next year and I am going to be as well prepared as I can be,” he added.