Triple N3TC Drak Challenge defending champion Andy Birkett has vowed to be back on the start line aiming to complete a fourth win in a row at the popular and highly competitive 72km two-day Southern Drakensberg-based race on 21 and 22 January. 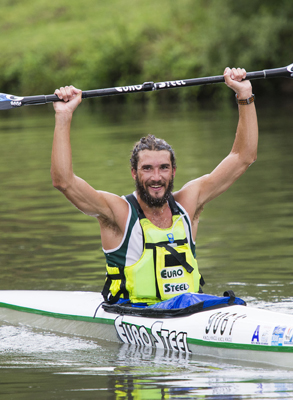 The Pietermaritzburg-based Euro Steel star is working his way back to top form after a well-earned breather following his podium finishes at the World Marathon Championships and the Hansa Fish Marathon in October, and sees the Drak Challenge as a key building block in his 2017 FNB Dusi campaign.

While the three day classic from Pietermaritzburg to Durban is Birkett’s summer priority, he makes no bones about his preference for using Underberg as a training base.

“From a training side being based in Underberg is so beneficial, the Drak is such a fun event and a fun river to paddle on, that I really want to spend time up there,” said Birkett.

After making his Drak debut as a schoolboy, it took Birkett eight years to come back and tackle the race again. This year he will be aiming for his tenth Drak, which will make him part of the small group of “Drak Trout” paddlers to have completed this unpredictable race ten times.

While he has won the last two races, he is quick to claim a fair portion of good fortune in those victories.

“Yes there were strong fields, and I can’t really remember how those races worked out, but I do believe I have had quite a bit of luck.

“I managed to make a gap a kilometre or so from the finish to win the race the one year,” says Birkett, recalling his thrilling win over eight times world champ and three times Drak champion Hank McGregor in 2015.

“Your river skills are so, so important on the Drak – maybe more important than any other race,” he added.

“You just can’t make any mistakes. It is an intense race and normally the racing is quite hot.

“You can also hardly ride a wave for the whole of Day One, so there is no benefit to playing a waiting game on the Drak,” he added.

Birkett will almost certainly have to square up to McGregor once again at the front of the race. Last year McGregor was in a large front bunch leading the race after Day One only to withdraw early on in the second stage, battling with stomach problems and the onset of bilharzia.

The pair, who pulled off an historic one:two for South Africa in the Men’s K1 race at the World Marathon Championships in Germany in September, have become regular adversaries, and replicated their Brandenberg result at the recent Hansa Fish Marathon that doubled as the SA K1 River Championships.

The pair quickly made it plain that they were the two best paddlers on the water, and more significantly spoke highly of the good sportsmanship that characterised both days of the race.

“I really enjoy close racing,” Birkett added. “It makes it so much more exciting and a lot more enjoyable, and to race against someone like Hank, who is the best in the world makes it even more special.”