Six-time champion Ant Stott will be back to race his eighteenth N3TC Drak Challenge in partnership with FNB on 1 and 2 February, saying that the iconic two-day outing on the Mzimkhulu River is a race that he places a high priority on.

Stott showed his solid current form with a second place in the 50 Miler with his Dusi partner Carl Folscher on the weekend, and says the Drak, apart from being a prized race title in its own right, is now an essential part of the Dusi build-up. 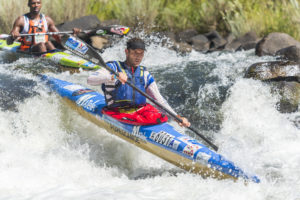 “The Drak comes at just the right time, three and a half weeks before the Dusi. You need a hard multi-day race that tests your river skills, and what better place to do that than on the Mzimkhulu,” says Stott.

Stott is quick to downplay his chances, but he will be a serious podium threat, particularly if the river conditions suit him.

“If the river is low it plays into my hands a bit because I have quite a bit of experience and know the lines down the rapids, but if it is full, like it is at the moment, it opens up to everyone who is racing hard.”

As a youngster who cut his teeth on the Mzimkhulu around Underberg Stott has a sentimental place for the Drak Challenge, which came to a popular high point when he won it in 1999.

He went on to win another five Drak titles in a career that saw him earn the moniker ‘King Of The Drak’, a record that Andy Birkett equalled last year.

“I will be there racing hard, but for me it is just such a great weekend away, and enjoying the two days on the river is what matters the most to me now,” he said.

“There is no race quite like it, and the whole weekend with the mountain biking and trail run and the concert is just amazing,” he added.