Entries have opened for the 24th edition of the N3TC Drak Challenge Canoe Marathon on the Mzimkhulu River in the Southern Drakensberg on Saturday 21 and Sunday 22 January 2017, with the popular 72km outing poised to kick start the KZN summer canoeing season already stifled by the ongoing drought.

The race is now well established as one of the three biggest in the country, attracting around 1000 paddlers to the Underberg area in the middle of the summer rainfall season, when the regular afternoon thunderstorms maintain the level of water in the Mzimkhulu River from the race start at Castleburn, through Underberg to the final stage finish at Early Mists Farm close to Coleford resort.

The first part of the KwaZulu-Natal canoeing season has been hit hard by the drought, with several Upper Mngeni races cancelled, and the 50 Miler in December truncated into a one-day race to take best advantage of the limited water available.

As a result many paddlers have been slow to start their river paddling season, many opting to train on surfskis and use the regular club-hosted flat-water marathon dice events instead. The recent Umpetha Chall 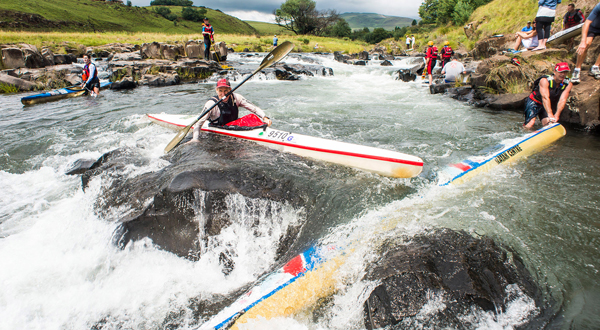 enge, that serves as the first seeding race for the FNB Dusi in February, reflected this trend with a smaller than usual field.

The N3TC Drak Challenge has managed to maintain it’s loyal following as paddlers have realised that the steep, rocky reaches of the Mzimkhulu River covered by the two-day race are perfectly paddleable, even in low conditions.

Unlike 2015, the region’s water table enjoyed the benefits of winter snowfall, as well as the unseasonal winter storms that rocked the region in July, allowing the Mzimkhulu to show quick rises to the river level once the first of the summer rainstorms fell.

“We have learnt some vital lessons from 2015 and 2016,” said race committee head Andrew Barnett.

“The popular view used to be that the race couldn’t be held below the foundation level at Castleburn bridge at the start of Day One. However we have taken the decision to race the race “from the top” twice in the last two years at this low level, and the paddlers have thoroughly enjoyed the challenge.

“One of the reasons why we have positioned this race as a K1 race is because it is an enjoyable paddle in a single, even when the river is low. We encourage K1 entries, and we also allow paddlers to change a K2 entry to two K1 entries on the day if they see the river is running lower than normal,” said Barnett.

He added that the race committee had been busy during the winter months with the ongoing wattle clearing programme, and removing debris from the river before the summer rains bolster the river levels.

The clean water and technically challenging nature of the rapids makes the Mzimkhulu a popular destination for many paddlers preparing for the FNB Dusi during the holiday months.

The race also provides the single biggest economic boom weekend for the Underberg-Himeville community as thousands of paddlers, their seconders and family converge on the region for the popular weekend.

The race has, since its inception, actively supported local community organisations like Pevensey Place, the Underberg School and the local Round Table, while channeling proceeds into the race funded Black Wattle eradication programme.

Entries for the race can be lodged here.